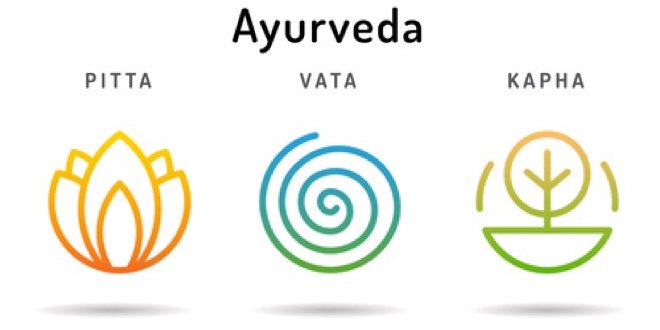 In the human body, various anatomical structures and physiological processes have common attributes, and are closely influenced by each other. Such related structures and functions are grouped into three governing principles in Ayurveda. These three psycho-physiological governing factors are called doshas. The Sanskrit names for these three governing factors or doshas are Vata, Pitta and Kapha.

The Vata principle includes the complete nervous system, some aspects of the endocrine glandular system which coordinate the metabolism and most of the sense organs. Vata structures and functions are also responsible for all the communications within the human being as well as the communication with the outer universe. Vata deals with transportation and movements within a person’s body and mind. Vata entities are responsible for the pumping action of the heart, the breathing process in the lungs, the peristaltic movement of the intestines, and all the movements of the bones and muscles.

Vata is also responsible for mental functions such as intuition, imagination, resilience, sensitivity, spontaneity, indecisiveness and emotions such as exhilaration, fear, insecurity and doubt. In lay terms, Vata represents the biological principles of air and space. Vata structures and functions usually have qualities such as dry, cold, light, quick, rough, unstable and subtle.

Pitta includes all the digestive enzymes secreted within our gastrointestinal system, the cellular enzymes and the stimulating hormones. Pitta structures and functions are responsible for all the digestion, absorption, assimilation, heat regulation, sweating and metabolism going on in the body and the mind. It also governs skin complexion, visual perception, and the process of understanding.

Pitta dosha is responsible for mental functions such as intelligence, confidence, enterprise, organisation and emotions such as joy, excitement, courage, anger, jealousy and hatred. Pitta may be described as the biological principle of fire and water. The structures and functions of Pitta have qualities such as hot, moist, light, fluid, sour-smelling, sharp and penetrating.

Kapha structures and functions are responsible for the growth, stability, lubrication and storage within the body. Kapha includes the musculoskeletal frame, composition of all joints, the process of tissue building, wound healing and various accumulations. Kapha dosha is also responsible for mental functions such as memory, tranquillity, faith, forgiveness, devotion, and emotions such as love, affection, calmness, patience, sympathy, attachment, greed and lethargy. Those with predominant Kapha are more susceptible to weight gain.

Kapha is the biological principle of water and earth. The Kapha structures and functions have qualities such as heavy, cold, wet, slow, steady, soft, oily, sweet and smooth.

Of all the three governing factors, Vata is fundamentally the most important, in that it coordinates both Pitta and Kapha. Vata governs all the general physical processes. Imbalances in Vata are therefore more serious in nature. Kapha provides the material foundation and support for both Vata and Pitta.

LOCATIONS of VATA, PITTA and KAPHA

The structures and functions of Vata, Pitta and Kapha are spread throughout the body, but in general, Kapha is more predominant in the area above the heart level. Important locations of Kapha are chest, throat, head, nose, sinuses, tongue, stomach, lymph and fat tissues. Within the digestive system, the primary location of Kapha is the stomach.

Pitta is generally more predominant in the area between the heart and the umbilicus. Important locations of Pitta are the small intestine, stomach, liver, gall bladder, pancreas, sweat glands, sebaceous glands, blood and organs of vision. Within the digestive system, the primary location of Pitta is the small intestine.

Vata is generally more predominant in the areas below the umbilicus level. Important locations of Vata are the colon, thighs, hips, bones, ears, and organs of touch. Within the digestive system, the primary location of Vata is the colon.

INFLUENCES FROM VARIOUS ASPECTS OF LIFE

WE PAUSE TO REFLECT